It’s all about you. We want to help you make the right coverage choices.

Advertiser Disclosure: We strive to help you make confident car insurance decisions. Comparison shopping should be easy. We are not affiliated with any one car insurance provider and cannot guarantee quotes from any single provider.

Our car insurance industry partnerships don’t influence our content. Our opinions are our own. To compare quotes from many different car insurance companies please enter your ZIP code on this page to use the free quote tool. The more quotes you compare, the more chances to save.

Editorial Guidelines: We are a free online resource for anyone interested in learning more about car insurance. Our goal is to be an objective, third-party resource for everything car insurance-related. We update our site regularly, and all content is reviewed by car insurance experts.

More than 40 million Americans (about one in six adults) indulge in binge drinking. The CDC defines binge drinking as consuming four standard drinks in a two-hour span for females and five for males.

Binge drinking has been on the rise over the last decade, with more than 8 million new binge drinkers since 2010. This article dives deep into the cities with the worst alcohol problems.

While binge drinking historically has been about twice as common in men as in women, new data suggests the gap is narrowing. Between 2014 and 2016, the number of binge drinkers increased by 2.9 million, out of which two-thirds were female.

The CDC estimates that excess drinking kills about 88,000 Americans each year from both direct causes, like alcoholic liver disease, and indirect causes, such as chronic hepatitis and oropharyngeal cancer.

The national age-adjusted fatality rate from causes directly related to excess drinking rose by more than 35 percent since 1999, from 7.1 to 9.6 deaths per 100,000 people. For women, the increase was 66 percent; and for white women, fatality rates rose by 103 percent.

Binge drinking is most common among the educated, affluent, and middle-aged, with whites having a higher likelihood of drinking than either Hispanics or blacks. Cities with higher proportions of these demographic groups are more likely to report higher rates of binge drinking.

The recent growth in female binge drinking is a trend experts attribute to the normalization of heavy drinking of high alcohol percentage in drinks for females, with targeted advertising and products such as the “Mad Housewife Mommy’s Little Helper,” “Skinnygirl Bare Naked Vodka,” and “Jane Walker.”

Female binge drinking is especially troubling in light of new studies which show that a single daily drink for females lowers life expectancy and increases the risk of brain atrophy and liver damage.

Given the growing prevalence of excessive drinking in the United States, our researchers here at CarInsurance101.com wanted to explore which cities report the highest rates of binge drinking. Using data from the CDC and the U.S. Census Bureau, we examined binge drinking across America’s largest cities.

Perhaps most interesting is that adults in cities with high rates of binge drinking also report being healthier overall.

This trend could reflect a disparity between individuals’ perceptions of their health and reality. These are the cities with the worst drinking problem.

If you’re on this page, it’s likely you’re looking for car insurance as well. However, car insurance can be confusing with all that industry terminology and the many varied reasons that go into your rates. That’s why we created our Car Insurance 101 page to take the confusion out of car insurance so that you know what types of coverages you need and what types you don’t.

Unfortunately as well, if you live in a city where people have heavy drinking problems, this can lead to a rise in your insurance rates, especially if this heavy drinking contributes to drunk driving traffic deaths. To get the best rates on car insurance, enter your ZIP code into our FREE online quote comparison tool.

It allows you to compare car insurance rates from different insurance companies without having to submit individual quotes with each company.

Now, let’s get to the 15 largest cities with the worst drinking problems.

Pay-as-you-go car insurance is a new type of insurance that’s helping drivers lower their premiums. This type of coverage offers rates based on how much you drive. So for people that don’t drive as much, this can be a great option.

Ever wonder how much it costs to insure a sports car like a Corvette? In general, sports cars are expensive to insure; however, car insurance for a Corvette is relatively affordable. In fact, it’s not much different than insurance on a Mini Cooper.

DID YOU KNOW?
A person’s age is one of the most important factors when calculating car insurance premiums. For example, car insurance for a 19-year-old is far more expensive than that for older drivers. Fortunately, driving schools can lower rates for new drivers.

Ranking All Cities by Drinking Problems

Frequently Asked Questions: All About Alcohol

Now that we’ve covered the 15 large cities with the worst alcohol problems, let’s get to your frequently asked questions. They include:

Scroll down for the answers to those questions and many more.

#1 – What city has the most alcoholics?

What is the drunkest town in America? According to our study, Washington D.C. has the most binge drinkers with 24.3% of D.C. residents reporting that they indulge in excess alcohol.

#2 – What state has the worst alcohol problem?

Wondering what is the drunkest state in America? The state with the highest DUI arrests per capita, according to FBI DUI arrest data and Census population information, is North Dakota with 633 DUI arrests per 100,000 residents.

#3 – What state drinks the most beer?

The states that drink the most beer are — surprise! — the states with the highest populations. Those are California, Texas, and Florida. However, when it comes to per capita beer drinking, New Hampshire, Montana, and Vermont top the list.

#4 – Which states are alcohol control states?

Minnesota is the only 3.2 beer state left (3.2 being the alcohol content of beer available at grocery and convenience stores). The 3.2 alcohol content level is seen as an old vestige of the Prohibition-era days.

They can, legally, but it’s highly discouraged as it could form the habit of drinking “beer” early, which might cause them to turn to actual beer sooner.

Kansas, Mississippi, and Tennessee are considered dry states, which means that the local municipality must authorize the sale of alcohol for it to be legal.

As long as the alcohol content in the Heineken is below the level defined by law (and of course below the level in which you can be arrested for drunk driving), certainly.

#8 – What country has the worst drinking problem?

Data on the proportion of all individuals, males, and females above 18 years who binge drink, as well as data on those who report being in good physical and mental health comes from the Centers for Disease Control and Prevention’s Behavioral Risk Factor Surveillance System Survey.

Not only does excessive alcohol consumption cause thousands of premature deaths, but it also costs the nation more than $249 billion annually in lost productivity, healthcare costs, and criminal justice costs, according to a study by the CDC. This amounts to almost $2 in additional costs for each alcoholic drink, which are borne by society.

The link between alcohol and lower life expectancy, higher risk of cancer, and brain atrophy has been known by scientists and physicians for some time. But new studies show that even low amounts of alcohol—such as those described in the national dietary guidelines and previously considered safe—can lower life expectancy in the long run.

This analysis finds that binge drinking is strongly associated with reporting good physical health, with a correlation of 49 percent.

Given the known health impacts of binge drinking, individuals who drink heavily are either unaware of their current health problems or are at a higher risk of health complications in the future. 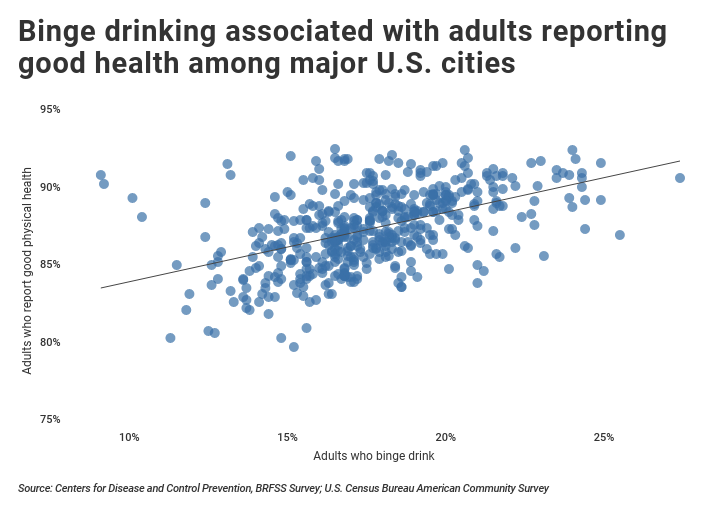 A deeper look into the data shows the association between binge drinking and having a college education is 38 percent, which represents a strong positive relationship.

There is also a statistically significant link between binge drinking and working in the management and business sector, where binge drinking is possibly more normalized than in other work fields, such as transportation.

Regional variation across the nation remains substantial at the state level, ranging from 11 percent in Utah to 24 percent in Washington D.C. and Wisconsin. In general, Midwestern states report the highest levels of binge drinking.

While regional cultural differences undoubtedly influence these patterns, the CDC outlines a few general procedures for curbing heavy drinking: these include alcohol sale restrictions, alcohol taxes, and strict enforcement of laws against underage drinking. Given that binge drinking is on the rise again, increased attention is needed to avoid the next public health crisis.

Binge drinking and its consequences — causing more alcohol-related traffic deaths — can result in higher insurance rates for an entire area, even if these events affect just a small percentage of the population. Fortunately, there are many ways to save on car insurance rates. Just plug in your ZIP code into our FREE online quote generator to receive the best rates for your area based on your demographic information and driving history.